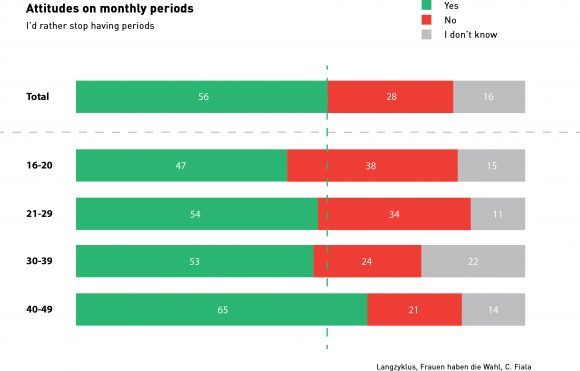 These results are from the “Austrian Contraception Survey 2012″, and they coincide with similar surveys from Germany. Due to the discomfort and inconvenience of menstruation, 38% of the women surveyed had already taken a hormonal contraceptive for an extended time to avoid having a period. Approximately 4% of women regularly managed their menstruation this way, while 14% did it occasionally. This practice is especially widespread among young women aged 21-29 years – about 50% have done it.

Shifting Menstruation: Among users of hormonal contraceptives, the so-called “long cycle” is becoming increasingly popular. Compared to the standard schedule of 21 or 24 days’ ingestion of an estrogen-progestin combination with a subsequent 4 or 7-day hormone-free break, the pill is taken over a long cycle without interruption for several months – maximum 6 months. Taking the pill without a break means the so-called “withdrawal bleeding” no longer occurs.
The monthly withdrawal bleeding is artificially triggered by the one-week break from the pill, ring, or patch. This break is not based on biological need, but was introduced by the pill’s inventors in the 1960s for marketing purposes. By imitating a ‘natural’ cycle, they hoped to increase the acceptance of the pill by health authorities and women.

Many women suffer from heavy periods, which can limit many aspects of their life and cause stress and discomfort. By adopting the long cycle with hormonal contraception or a hormonal IUD, women now have the ability to reduce heavy bleeding, with many positive effects on their lives and health.